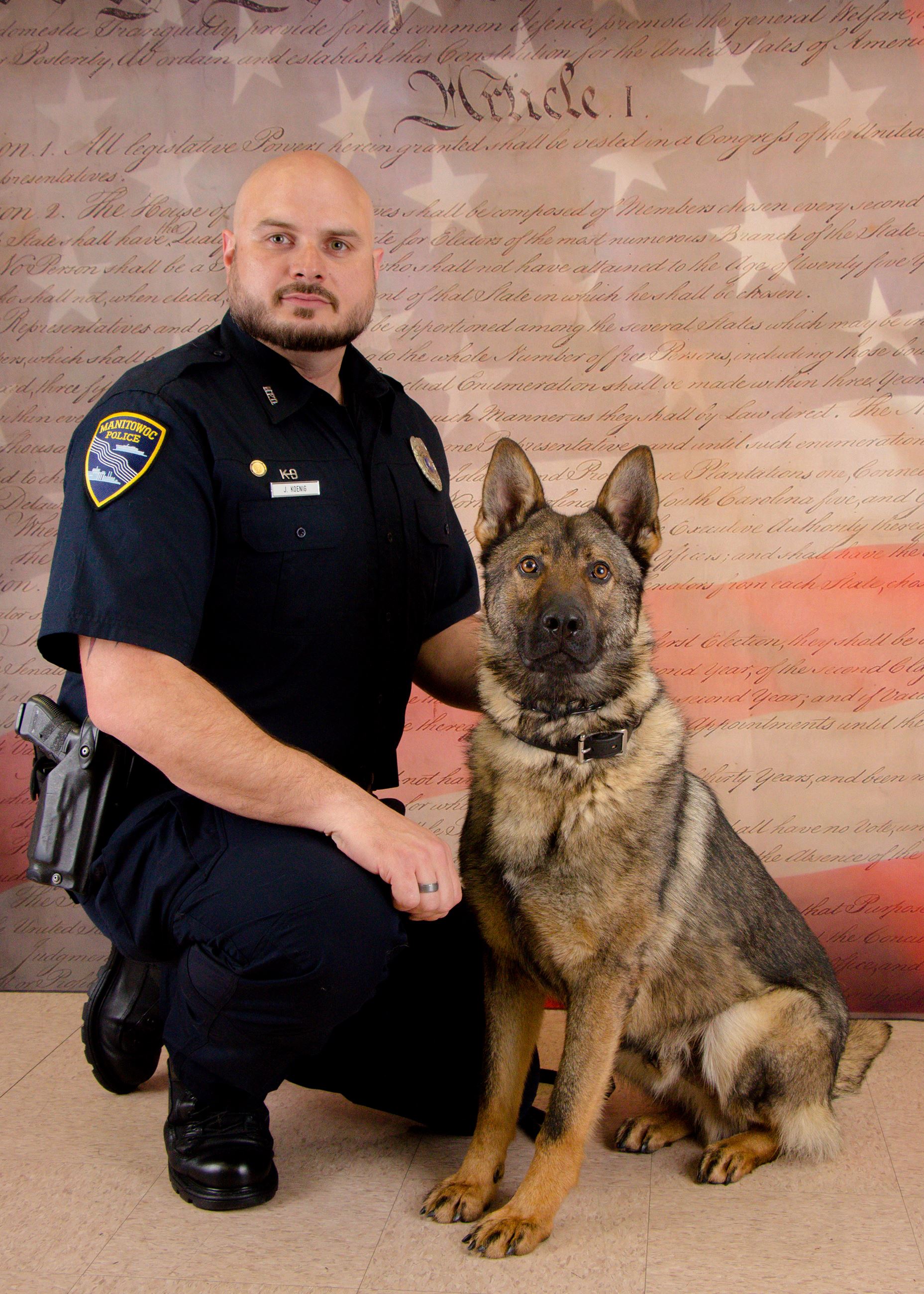 How does the K9 program benefit the community?  Like most areas around the country, Manitowoc has experienced an increase in drug use and other crimes associated with an increase in drug dependent individuals seeking to support their habit.  To help combat this epidemic, the most common deployment for our K9 Unit is narcotics sniffs.  Our K9 teams routinely conduct vehicle sniffs during traffic stops, and also assist local schools and businesses with narcotics sniffs upon request to assist those organizations to keep a drug free environment.

Our police working dogs are considered “dual purpose”, and can be used to locate people and evidence in addition to narcotics.  Our K9 teams frequently track suspects, conduct building searches, search for evidence at crime scenes, and perform area searches for suspects and lost people.  By using the dog’s keen sense of smell, our K9 teams are able to locate people and items much faster than a human.

A benefit of having dual purpose police working dogs is they can be used to apprehend suspects without the use of deadly force. During January, 2016, Manitowoc Police responded to a report of a pizza delivery man who was robbed at gunpoint by two suspects, who then fled on foot near S 19th St. and Franklin St.  With the help of a witness, police were able to locate the subjects hiding in a garage of a south side home.  The subjects fled on foot again from the garage, one of whom was located hiding underneath a set of bushes.  After multiple commands to show his hands and surrender, the suspect refused to comply with orders, and K9 Major was sent to bite and apprehend the suspect.  K9 Major fearlessly did his job and the suspect was apprehended without the loss of life.  The suspect and his accomplice were taken into custody, the gun was located by officers, and both suspects were convicted of armed robbery.

The K9 program was started in 2010 and remains largely funded by generous donations and grant monies. Our goal is to continue raising money in order to maintain a multi-unit K9 team and to cover daily/operating costs of the program. The funds will be used to cover police vehicles, necessary equipment for the K9 units, training and certifications that are necessary to maintain the effectiveness of the teams, and miscellaneous expenses to support the program (food, medical/veterinary expenses, etc).  Our goal is to maximize the benefit of this amazing program in our community for years to come.

With some of our fundraising monies we were able to start a partnership with Lakeshore Community Foundation by creating a preservation fund for further K9 program costs. If you would like to learn more about this preservation fund, please visit us at lakeshorecommunityfoundation.org/k9.html.

If you would like to help support our program and make a monetary tax deductible donation, please complete the sponsorship form, and return it along with your check payable to the Manitowoc Police Department K9 Unit Fundraiser. For more information about the K9 Unit, please see the included brochure. If you have further questions, comments or wish to have a K9 demonstration, please do not hesitate to contact Assistant Chief Jason Freiboth at (920) 686-6562 during normal business hours 7:30 a.m. to 4:30 p.m. Monday through Friday.

Thank you in advance for your generous contributions to our program.

"In Kind" Donations received from:

The Manitowoc Police Department and the K9 Unit(s)/Handler(s) wish to THANK the following businesses for their on going care and services provided to our canines. Generous services provided from donors like each of you provide the financial and moral support needed to continue our mission. You have demonstrated a deep commitment to our program and your continued support plays a key role in our success. There is no way to fully express our gratitude for your loyalty and we are continually inspired by the dedication and generosity of donors like yourself who answer the call to give again and again. THANK YOU!!!

Also a very special THANK YOU to Fricke Printing Services for providing various printing services throughout our K9 Fundraiser. The dedication and attention to detail received from Fricke Printing goes unnoticed and we appreciate the services they provided.

And finally another very special THANK YOU to Manitowoc Trophy for providing services for our atrium lobby display K9 plaque. Their attention to detail is greatly appreciated and important to our fundraising success. Their generous donation will help to further the important work of the K9 Unit.