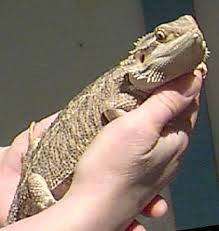 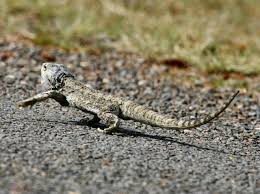 Bearded Dragon - Grant the male bearded dragon shares his exhibit at the zoo with the female Puff. Grant came to the zoo in 2002 and is a few years older than Puff who arrived in 2010. They both love crickets to eat but Grant is sometimes lazy and will not chase his meal, but waits to be hand fed. Puff is slightly smaller and has a brighter color than the grey Grant.

Russian Tortoise - The zoo's trio of Russian tortoises share the same exhibit with the bearded dragons. Anastasia, Alfred, and Annabelle get along well with the dragons sharing the space and their diet of vegetables and fruit. Want more information on the Russian Tortoise? Click here to learn more about the care, housing, diet of the Russian Tortoise and more.

The bearded dragon is an animal of least concern for extinction. Their populations are stable.

Russian tortoises are vulnerable and their trade is restricted.

There are no threats to the bearded dragon.

Russian tortoises' habitat is being lost to human construction and are hunted to be used in traditional folk medicines as well as the pet trade.