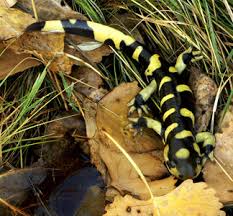 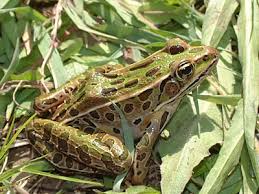 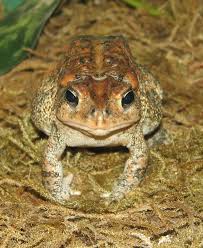 Tiger Salamander - The tiger salamanders live in a large aquarium and share their home with a wide variety of frogs and toads. Their habitat consists of a water area to swim, plants, and rocks to hide behind and a large area to catch their meals of crickets.

Green Frogs, Leopard Frogs, Pickerel Frogs, and American Toads - These frogs and toads share the amphibian tank with each other as well as the tiger salamander.

The tiger salamander is a species of least concern in becoming endangered. They are known as being common in local populations but overall their numbers have declined.

The green frog is abundant and a species of least concern in becoming endangered. They are protected in some states.

The leopard frog is a protected native species in Wisconsin.

The pickerel frog is stable in most of its habitat but in Wisconsin it is considered a species of special concern by the Wisconsin Department of Natural Resources.

The American toad species is common and their population numbers are secure due to their great adaptability.

Threats to tiger salamanders include habitat destruction, pesticide and contaminate pollution, and collection for research and the pet trade.

The green frog species is secure and has no threats at this time.

Threats to the leopard frog include habitat destruction, pollution, disease, and harvesting for the pet trade.

Like many amphibians the pickerel frog is threatened by pollution and habitat destruction.

A threat to the American toad population is pollution in their habitat.