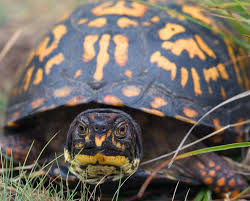 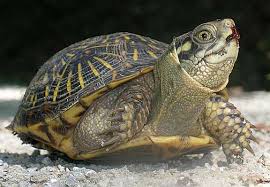 The zoo's two box turtles like to bury themselves in the dirt of their exhibit and hide for most of the day. They come out to bathe in their water dish and eat their diet of vegetables and fruit.

Box turtles are fairly common but their future is uncertain.

Threats to the box turtle population are habitat destruction, collection for the pet trade and death by human activity such as: being hit by cars, lawnmowers, tractors, and farm equipment.