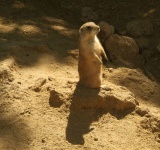 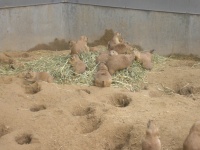 The zoo’s present colony of prairie dogs was received in August of 2010. They were donated by the Minnesota Zoological Gardens.

The Prairie Dog occupies just 2% of its original range. In 1900 its numbers reached as high as 5 million. But decades of shooting and poisoning have reduced its population by over 90%.

The main threat to Prairie Dogs is mans continued poisoning and shooting in areas where cattle roam.